Presents
Pamphlet #1020
"Do you know who you really are?"
Are you a Israelite?
Be thoughtful before you answer.
(Maybe you only think you're a Gentile!)

In 745-721 B.C. after being taken captive and relocated below the Black and Caspian Seas,
the tribes of the House of Israel plus tens of thousands of Jews (from the House of Judah)
were used by their Assyrian conquerors as a buffer state to ward off any advances by the Medes.

Soon, groups of Israelites started moving out to east, and north.
The main body of people remained in the area for about a hundred years,
during which time they fought as mercenaries for just about everyone.

Their unique triangular arrow points were even found in the ruins of one of the burned gates of Jerusalem;
meaning that some of them were in on the conquering of Jerusalem by Nebuchadnezzor!

Soon after the power of the Assyrians was broken,
vast numbers of the Israelites began several migrations,
with the main two groups moving west under the Black Sea,
and north through the Dariel pass of the Caucasas mountains into the steppes of south Russia.

A large group also moved east.
These were called Sakka (Saka) and Iskuza by the Medes and Persians.
The Japanese name Sakai is but a step away from Saka.
There are many strange customs of unknown origin in Japan
that can only be explained by recognizing that some from the east Jordan tribes of Manasseh, Reuben and Gad,
Manasseh being pre-eminant, made their way to that far eastern Island,
while their cousins headed west to populate northwest Europe and the far western island of Britain.

Some of these migrations were undertaken all the way into the 17th century when,
in the final migration,
some from the tribe of Manasseh sailed the north Atlantic to Plymouth to fulfill Isaiah 49:20,
which was prophesied to the hegemony of the House of Israel, Ephraim (England).

You see, the crux of the whole LT subject is that the names we want to look for to trace the Israelites
are not the names that historical accounts and archeological finds give those same folks.

To more confuse the issue,
large groups of Israelites called themselves by different names.
Some of them called themselves the House of Isaac,
which is pronounced e-sahk with the emphasis on the last syllable.
How natural for the Persians to call them the Sakka (Sacae in Greek),
while the Assyrians called others, the House of Omri, after the sixth king of Israel.
This name sounded like Khumri, and was variously pronounced Ghumri, Gimri, Gimira, Gammer,
all of which turned into the Greek Kimmeroii, our English word Cimmerians.

The Israelites weren't lost, their name got lost.
That fact coupled with the erroneous search for the Jews'
fulfillment of the Old Testament prophesies has held
the Lost Tribes teaching in virtual obscurity these millenia since 500 BC.

At the end of the drawings below I've included a list of many of the names given to the various groups of Israelites
as they made their way to their new homes.

I hope you'll be able to continue in this field of study.
You'll probably discover that your own lineage goes back to those Bible people. 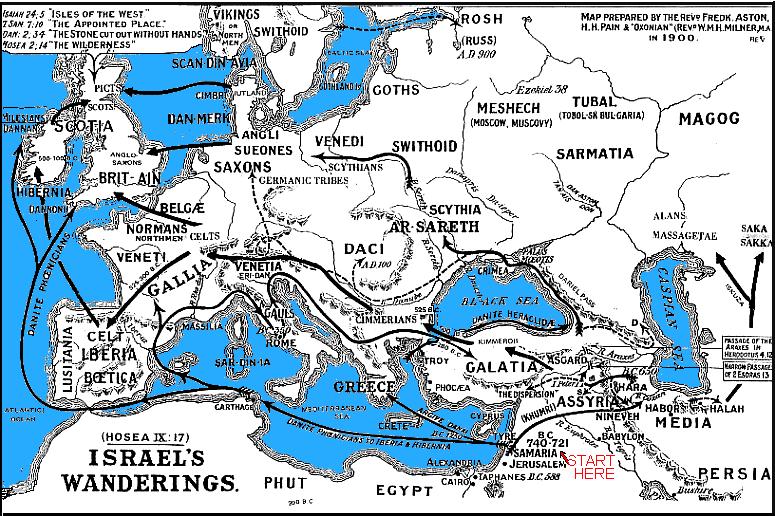 
MIGRATIONS OF THE HOUSE OF ISRAEL

Israel taken into exile by the Assyrians who called them Khumri, later corrupted to Gimira.

Israelites, called Gimira by the Assyrians and Kimmeroii(Cimmerians) by the Greeks, established a reign of terror in Asia Minor. They finally migrated to Europe, to a place which they called Arsareth (2 Esdras 13:40-44 of the Apochrypha)

Israelites in Media became known as Scythians. Fought as mercenaries; once with Babylon against Jerusalem.

Following the collapse of their Assyrian allies, the Scythians were driven north through the Caucasus by the Medes, and they settled in south Russia.

Cimmerians in Europe moved up the Danube and became known as Celts; the English deirivative of the Greek Keltoi.

Others driven out of south Russia by the Scythians moved north-west between the rivers Oder and Vistula to the Baltic, where they later became known as Cimbri.

The Celtic expansion from central Europe: some attacked Rome in 390 BC and settled for 200 years in northern Italy; others known as Galatians, after invading Greece in 279 BC, migrated to Asia Minor. Most of them moved west into France and later to Britain.

South Russia was invaded from the east by the Sarmatians, who drove the Scythians north-west through Poland into Germany.

The Romans re-named the Scythians Germans ("genuine") to distinguish from the newly arrived Sarmatians in Scythia. Some of these came to Britain as Anglo-Saxons, AD 450-600; others, after moving north through Jutland, became known as Danes and Vikings. Some of these came directly to England, but others settled for a short time in France and were called Normans.

In 457 BC King Artaxerxes decreeed that any Jew in his realm,
including the priests and Levites,
may return to Jerusalem Ezra 7:13 after the Temple is rebuilt.

Ezra and Nehemiah went back to Jerusalem,
but they took with them only a REMNANT from the House of Judah.
The rest of Judah, the majority of them,
went north over the Caucasus Mountains with the other tribes from the House of Israel
and to this very day most of true Judah and Israel do not know who they are.
Though they basically comprise the Christian nations of the world,
in their ignorance they call themselves gentiles.

Now during the trip back to Jerusalem,
at one point Ezra stopped and gathered the people together and took a census.
And guess what he found, or better yet, what he didn't find?

Read it yourself:
Ezra 8:15 And I gathered them together to the river than runneth to Ahava;
and there abode we in tents three days:
and I viewed the people, and the priests, and found there none of the sons of Levi.

There were no Levitical priests among them.
NONE!
So Ezra sent some Nethinims, who were temple helpers,
back to Babylon to get some Real Ministers, some genuine Levites,
for the house of God.

[18] And by the good hand of our God upon us they brought us a man of understanding,
of the sons of Mahli, the son of Levi, the son of Israel;
and Sherebiah, with his sons and his brethren, eighteen;

Well, they did what Ezra asked them to.
They brought back some Levites,
but they did not come back with very many.

And though these Levites would serve in the temple for some time,
by the time of Christ the sons of Cain will have taken over.
In fact, Caiaphas the high priest,
would actually be appointed by the Roman governor.

Again, so that we understand the conversation that is about to take place
in John between Jesus and the scribes and Pharisees
we need to know that out of the 400 year period from the time of Malachi,
the last book in the Old Testament,
to the time of Christ would come forth the Great Synagogue.

And many of the ruling authorities of the temple,
those religious leaders in charge,
would not be of the seed of Abraham,
i.e. true Israelites or Levitical Priests,
but would be the wicked sons of Cain,
who are called "kenites" (pronounced cainites) in the Bible.

They will try to convince Jesus that they are of the "seed" of Abraham,
BY BIRTH! But they are not!
They are liars and are of the synagogue of Satan (Rev. 2:9, 3:9

Is it any wonder Jesus told them
John 8:44 "Ye are of your father the devil,
and the lusts of your father ye will do.
He was a murderer from the beginning,
and abode not in the truth,
because there is no truth in him.
When he speaketh a lie, he speaketh of his own:
for he is a liar, and the father of it."

It doesn't get any plainer than these words of Jesus Christ.
These particular scribes and Pharisees were not who they claimed to be,
i.e. they were not children of Abraham,
and so by default they could not even be of Judah.
They were descendants of Cain,
the first son of Satan, the first murderer.
It was Cain's offspring, the kenites,
who were responsible for the crucifixion of Jesus Christ,
though Judah has been the one blamed for it.

Now most preachers and ministers and commentaries
will try to "spiritualize away" this 44th verse in John 8,
and say Christ wasn't talking about "sperma", i.e. seed and offspring.

But let me ask you,
is there not a group of people who run around today claiming that they are God's chosen people?

Those Christians who belong to the church of Smyrna know they are not!

Rev. 2:8-9 And unto the angel of the church in Smyrna write;
These things saith the first and the last, which was dead, and is alive;

[9] I know thy works, and tribulation, and poverty,
(but thou art rich) andI know the blasphemy of them which say they are Jews,
and are not, but are the synagogue of Satan.

Those Christians who belong to the church of Philadelphia know they are not!

Rev. 3:7-9 And to the angel of the church in Philadelphia write;
These things saith he that is holy, he that is true,
he that hath the key of David, he that openeth,
and no man shutteth; and shutteth, and no man openeth;

[8] I know thy works: behold, I have set before thee an open door,
and no man can shut it:
for thou hast a little strength, and hast kept my word,
and hast not denied my name.

The question is, "Do you know who they are?"

THE NAME'S THE GAME

This is an incomplete list of names for various groups of Israelites as they migrated.

America was settled by people from all these tribes.
(Especially the tribe of Manasseh)

So I repeat,
Are you a Israelite?

I didn't ask,
Are you a Jew? (Son of Judah)
or maybe a kenite pretending to be a Jew

I ask
Are you a Israelite? (Son of one of the "lost tribes of Israel")


Because if you are
It changes the whole way you study the Bible.