Studying God's Word in these last days sure is exciting?

Here we are, present when many Biblical prophecies are coming to pass!

The prophets like Ezekiel and Daniel and all the disciples of Christ
wanted to know what it would be like in our day,
in the final generation,
the generation of the fig tree which was planted in 1948,
the first born of whom are nearly 70.

Live Link to-  The Parable of the Fig Tree

Do you realize how blessed we are that our Father saved you and me to be born now, to witness the birth of a new age?
At this time, 6,000 years since the creation of the individual man (Adam) and his wife (Eve), i.e. The two eighth day individuals God formed, through which their descendant Jesus Christ (God in the Flesh) would be born, also of flesh and blood, in order for God to make it possible to salvage His children from the same fate as Satan's (Which is to die in the "Lake of Fire, and be no more)

Do you realize how exciting things will be shortly?

Why?  We get to face the Dragon and his locust army!
(I said exciting, not easy!)

The Book of Revelation tells us about it, and no matter what you may have been told is actually very easy to comprehend?
Once we take the time to understand the symbolism that the Holy Spirit uses to paint vivid pictures for us, the meaning becomes self evident.

Often it just requires the application of common sense more so than "doctoral like" scholarship.

Now let's study the revelation of the "Acts of the Dragon" in Rev. 13:5.
Rev. 13:5 And there was given unto him a mouth speaking great things and blasphemies; and power was given unto him to continue forty and two months. Rev. 13:6 And he opened his mouth in blasphemy against God, to blaspheme his name, and his tabernacle, and them that dwell in heaven.
Many people when they read these last two verses imagine that the dragon, Satan, the antichrist, when he comes to earth as the spurious messiah,
is going to say evil things against God.

That's the blaspheme!
Remember what Paul told us would happen BEFORE our gathering back to Christ?
2 Thes. 2:3 Let no man deceive you by any means: for that day shall not come, except there come a falling away first, and that man of sin be revealed, the son of perdition;
The "falling away" is the great apostasy which
we will read of in a few verses in Rev. 13:8
whereby the whole world worships the dragon,
the son of perdition,
the son who will perish, i.e. Satan,
because of the next verse in 2 Thessalonians.
2 Thes. 2:4 Who opposeth and exalteth himself above all that is called God, or that is worshipped; so that he as God sitteth in the temple of God, shewing himself that he is God.
There is your blaspheme of Rev. 13:6!

Blaspheme of God's "name and His tabernacle and all that is in heaven".

Satan sits in the temple of God claiming to be the Messiah and all those Christians who didn't have enough oil in their lamps,
i.e. were Biblically illiterate and were not sealed with the knowledge of His Word, are bowing to the dragon, worshipping Satan, believing he is Jesus!

The dragon is really good at deception.
Just wait a few verses and we'll see him perform "miracles" to dazzle the troops!
Rev. 13:8 And all that dwell upon the earth shall worship him, whose names are not written in the book of life of the Lamb slain from the foundation of the world.
There it is, the Great Apostasy!

If you don't know ahead of time that there are two Christs,
if you don't understand 2 Thes. 2 and the 7 Seals real, real good,
then you will worship Satan as Jesus.

You see, from Ezekiel 28 we know how beautiful and marvelous
and wonderful and charismatic this guy really is!

And from Daniel we know he enters in peacefully and prosperously
with a booming economy,
meaning big bucks for everyone ("It's the economy, stupid!")!

And from the previous chapter in Revelation, chapter 12,
we know that he drew a third of God's children away from God in the first earth age!

Folks, he's really, really good at swooning people!
They just love him to death (both figuratively and literally)!

And do you want to know something that's a mystery to most,
yet it is real simple?

Remember in chapter 12 we saw the woman, clothed with the sun,
with her 12 stars standing there facing the dragon and his own?

She was standing there "ready to go" in the first earth age,
before the foundation of this earth age! 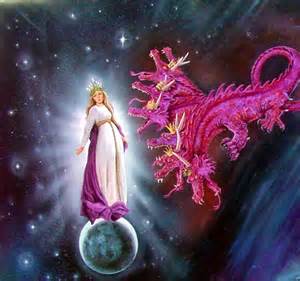 It is those who stood against the dragon in that first earth age,
before the foundation of this world,
who already had their names written in the Lamb's Book of Life when they entered this earth age of flesh and blood man and woman, born through the womb of a earth woman.

But Maybe you are not one of those who stood against the dragon, Satan, when he drew 1/3 of us into his camp, against God, during the first earth age.  If that is the case there is still time to get your name entered in the book of life, by grace, in this earth age, if you believe Jesus is THE ONLY BEGOTTEN SON OF GOD, and repent of your sins in His name! That is "God's Plan" for His children. To salvage as many of our souls from perishing in "The Lake of Fire", those individuals who will accept His offer, as possible.

But, you must enter into "The Book of Life" by the name of Jesus Christ!

Have you repented of your sins and ask forgiveness, claiming the blood of Christ as your covering.

Live Link to-  The Plan of God

In Revelation chapters 1 through 3 Christ took the apostle John, in the spirit, 2000 years into the future to this 21st. century, and showed him what is/will be happening on EARTH and in the seven "END of TIME" churches on the day of Lord, the first day of the Millennium, a time even yet future, but very, very near since we are already nearly 70 years into the "Fig Tree"  generation.


Please keep in mind as you read these accounts in Revelation that our Lord took John spiritually into the future (this is prophecy) and many of these events that he describes haven't happened, as yet, in real time even though John has seen them.

Now we are going to read The seven SEALS of Christ's Revelation and "see" what He showed John is/will be happening in HEAVEN at this same time.
We are going to actually see the throne of Almighty God and what is transpiring beyond the veil that separates the two dimensions, flesh and spirit, "behind the scenes" so to speak.

Live Link to- The seven SEALS of Christ's Revelation

Live Links to the End TimeTrumpets of Revelation chapter 9 below.

In chapter 12 this Book of the Unveiling John was privilaged to SEE in PICTURE format the very plan of God, from the first earth age even to the third and last earth age, all in one chapter.

God has allowed and is allowing Satan, through his children, the Kenites, to make alterations in our Bibles. When I compare some of our most popular new versions of the Bible to the original 1611 King James Bible it is shocking what I've found. Many of them published since the 1970s Joel1:3 Tell ye your children of it, and let your children tell their children, and their children another generation.

Live Link to- The Famine is Coming

And because of this, Chapter 13 of the Book of Revelation is to many folks one of the scariest and most misunderstood chapters in all the Bible

By the way, if your father or one of your forefathers has broken this commandment of God in Joel 1:3 to tell your children His words contained herein, then YOU get busy studying His Word and learn the truth and restart the process with your children. John 14:15 "If ye love me, keep my commandments."

In Revelation chapter 14 we get to see what will be happening on earth when Jesus Christ returns. Good old John is still in heaven and once again he looks on and has already seen it..

In chapter 14 we saw what will be happening on earth at Christ's return. Now in chapter 15 we are going to see what will be happening from the vantage point of heaven at that same time. In chapter 16 we see the 7 Vials containing the wrath of God pours out upon those who had/will have the mark of the beast in their foreheads (minds) and who worshipped Satan, the false messiah, as Jesus Christ.
Live Link to- Revelation chapters 15 & 16

In chapter 16 we saw the 7 Vials containing the wrath of God to be poured out upon those who had the mark of the beast in their foreheads (minds) and who worshipped Satan, the false messiah, as Jesus Christ.
We will now see one of those 7 angels who poured out the vials come and give us a "close up" view of the judgment of the "Great Whore". Maybe we should update the terminology a little and call her the "Great Slut" because the Holy Spirit wants us to get a real good PICTURE of exactly how He looks upon the false religious system  that spews forth from of our churches, that great city where the "son of perdition" will sit claiming that he is God (2 Thes. 2).  Also, be it known that our Father deals in reality, so if the terminology used here is offensive then one can always go to a church where they only teach nice things like cute little bunny rabbits and Ishtar eggs, real Biblical gems.

We come now to the 20th chapter of Revelation at which point the 7th Trump has sounded and the true Jesus Christ has returned with great power and glory, bringing with Him His army of saints. Babylon the Great, i.e. the one world political system and the great whore along with Satan's role as the false-christ, the spurious messiah, has been destroyed forever and ever. And as we learned in our chapter 19, ALL flesh has been "changed" and everyone, both the good and the bad are in their spiritual bodies.
So it is the first day of the Millennium and John, who remember in Rev. 1:16 was taken there for an eye witness account, gives us another advanced news report, this time concerning the fate of Satan during the Millennium. Can't you just visualize the headlines?

John, the disciple whom Jesus loved, was present today as Michael came down from heaven and appeared on Satan's doorstep with a warrant from the King of kings for his arrest. Satan has been residing in the temple for the last 5 months (ever since Michael cast him from heaven) where he has been impersonating Jesus Christ and claiming he is the Messiah come. He also is being held responsible for orchestrating the murder of God's two witnesses, a despicable crime, which he has been actually celebrating with his cronies for the last 3 1/2 days