The Israelites are TWO STICKS, not one!

In our last study we learned that there was a group of scribes and Pharisees
who tried to tell Jesus Christ that they were of the "seed of Abraham" by birth.

However, He didn't "buy it"
and straightway identified them as being of,
as in the offspring of,
their father the first murder who is ALSO the father of the liars
who today also claim to be true descendants of Abraham!

Here is Christ confronting a group of Kenites and exposing them as liars:

John 8:44 Ye are of your father the devil, and the lusts of your father ye will do. He was a murderer from the beginning, and abode not in the truth, because there is no truth in him. When he speaketh a lie, he speaketh of his own: for he is a liar, and the father of it.

What one must understand is that there is still a group today
who continually tell Biblically illiterate Christians
that they are also of the "seed of Abraham",
even of Judah who was Abraham's great grandson,
and therefore they claim they are "God's chosen people" by birthright!

When will our people quit being so naive
and learn that just because someone "claims" to be something,
like a descendant of Judah or even a Christian minister,
doesn't make it so?

The Kenites today speak the very same lie "about their own"
(i.e. their ancestry) that they tried to "pull over" the eyes and ears of Messiah
in John chapter 8. Sadly though, most Christians today,
except those of the churches of Smyrna and Philadelphia,
"believe their lie"!

Of course most Christians do not even know the difference
between an Hebrew, an Israelite and a Jew.

While it is true that Judah was a son of Jacob (whose named was changed to Israel)
he was only one out of 12 sons, i.e.

You see, all true Jews (Judahites) are of Israel
and all Israelites are of Isaac and of Abraham,
but as the chart below clearly shows it certainly does NOT work the other way around.

In fact, most Hebrews and most Israelites are not of Judah, i.e. they are not Jews!

Biblical and secular history both show that following the reign of Solomon,
the last king of Israel to rule over all 12 tribes,
the southern tribe of Judah along with the tribe of Benjamin
and their share of the Levites split from the northern 10 tribes.

This should be very common knowledge
given that most Bibles have a map in their appendix
like the following one which pictorially displays the division of the two houses. 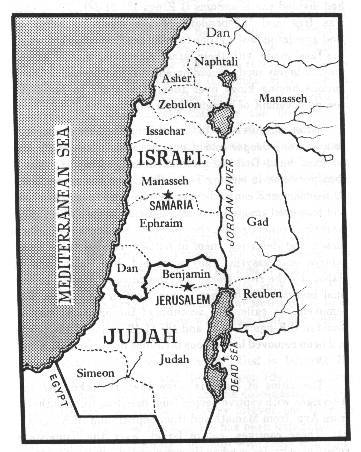 To this day the two houses (branches) of the House of Judah and the House of Israel
remain divided and furthermore,
they will NOT be joined back together into "one stick" until Jesus Christ returns at the 7th Trump.

Your documentation is found in Ezek. 37:

Ezekiel 37:15
The word of the LORD came again unto me, saying,

[17] And join them one to another into one stick; and they shall become one in thine hand.

Ezekiel was to openly display before the people the joining together
of two sticks into one
and he was to tell the people who ask the meaning thereof,
the following explanation from the Word of God:

The Houses of Judah and the House of Israel
will be reunited (restored) under one house when Jesus Christ returns.

Until then, do not let some Biblically illiterate preacher
from one of the five churches Christ has problems with in Rev. 2-3
tell you that the tribe of Judah IS the same as the House of Israel.

It is most definitely NOT for they are TWO STICKS, not one!

You see, that little nation in the Middle East
that calls itself Israel and its citizens Israelis (not Israelites)
is NOT the House of Israel but rather the House of Judah,
and then only in part
which is what today's study reveals to those who seek understanding!