Notice that the judgment begins at the house of the Lord,
His sanctuary (1 Peter 4:17). Preachers beware!!!

Four Trumps have now sounded as we move down the line towards the end, to the angel of the 5th Trump, which is the first of the 3 Woe Trumpets. Remember that the "woe" is to the inhabiters of the earth. The spiritual conditions down here have so deteriorated to the point that the enemies of God and of His children will now be likened to a great army of swarming locusts. This is the "Picture" that our Father would have us see in our "minds eye" representing the terrible devastation wrought upon the minds and souls of men and women by the "children of disobedience".

Rev. 9:1
And the fifth angel sounded, and I saw a star fall from heaven unto the earth: and to him was given the key of the bottomless pit.

The word "fall" used here should be "fallen" (See note on verse 1 in the Companion Bible). In other words, John now sees a star "which had fallen" from heaven, previously in the world that then was, be given the key to the bottomless pit.

What is the bottomless pit?  A pit is a something with which everyone is familiar, a hole in ground for instance, that you can look down into. (Keep in mind, however, that there are some who can't tell the difference between their donkey and a hole in the ground. Fortunately, our Father uses many different analogies so that perhaps one will "ring a bell" up there.) However, when you look into the pit described here there is no end in sight, for it is so deep it has no bottom, hence the term "bottomless".

This Picture in your mind is to graphically illustrate the depth of the state of degradation to which the one who is in the pit has fallen, i.e. Satan. He has fallen to a depth so far down and is become so infinitely low that you cannot get any lower. Got it?

Now, let's see what happens when the bottomless pit is opened.

[2] And he opened the bottomless pit; and there arose a smoke out of the pit, as the smoke of a great furnace; and the sun and the air were darkened by reason of the smoke of the pit.

Now to continue with the picture in your mind's eye. The first thing out of the pit is so great a cloud of smoke (read deception) that you can't see any truth anywhere.  Everything is dark. And what is causing this humongous smoke screen of deception?

[3] And there came out of the smoke locusts upon the earth: and unto them was given power, as the scorpions of the earth have power.

LOCUSTS? Do you mean insects?

No, now you're off track again!

"This entire description is the "Picture" that our Father would have us see in our "minds eye" representing the terrible devastation wrought upon the minds and souls of men and women by the "children of disobedience". Understand, you can't "see" a lie . And you can't see it devour someone's chance to see the truth.

So we are talking about the enemies of God and "Seeing" an analogous "Picture" of them. They are like a bunch of insects, i.e. locusts, scorpions, etc.

Are they to be feared?

NAW! Jesus Christ has given His own (Us, if We have eyes to see) His Two-edged Sword, remember? And along with it, the POWER of it, i.e. the power to wield it! Here's what He has to say about creepy, crawly snakes and insects, i.e. low life creatures, Satan's own.

Luke 10:19
Behold, I give unto you power to tread on serpents and scorpions, and over all the power of the enemy: and nothing shall by any means hurt you.

Actually, you see, you can just tread on these venomous insects with the gospel armour boots and save the Sword for the fire breathing dragon, to cut off his head! "I just can't wait for the opportunity". I've got gospel armour! "Let that old dragon out of the pit!"

Now, here's another key to remember to help understand "Pictures" more fully, shall we say to a deeper level.The Holy Spirit in giving us these Pictures doesn't just arbitrarily pick the symbols He uses. There is a purpose and a meaning contained in the selection. So if we learn the characteristics of the symbols we can better understand what is being described.

Let's start with the scorpion. Here's a link, one of many, where you can go to learn how the scorpion takes its prey. 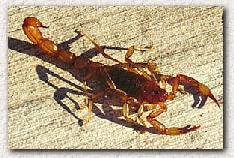 You'll learn that scorpions are nocturnal, i.e. creatures of the night. They love darkness. That certainly fits! And here's a paragraph from this website describing the venom which, guess what?, affects the nervous system of its victims.Hmmmmm!

"The venom of scorpions is used for both prey capture and defense. Scorpion venoms are complex mixtures of neurotoxins (toxins which affect the victim's nervous system) and other substances; each species has a unique mixture."

And what of the locusts? We don't even need to research the worldwide web for this one. We can go to the Book of Joel, which we will later, and to Exodus, where God's two witnesses, Moses and Aaron, were sent to Pharaoh. Here we see locusts used in one of the judgments poured out, where we "See" the physical type set forth.

Note: Those locusts were sent by God just as we will read in Joel that these locusts in Revelation are also sent by, controlled by, God. Why? For the same reason the plagues were brought upon Egypt... "So that they may know that the Lord God Almighty doth reign supreme in both heaven and earth".

These insects when they swarmed through the land of Egypt consumed everything in their path.

Exodus 10:14-15
And the locusts went up over all the land of Egypt, and rested in all the coasts of Egypt: very grievous were they; before them there were no such locusts as they, neither after them shall be such. [15] For they covered the face of the whole earth, so that the land was darkened; and they did eat every herb of the land, and all the fruit of the trees which the hail had left: and there remained not any green thing in the trees, or in the herbs of the field, through all the land of Egypt.

They licked the platter clean, Jack!

But wait, those were actual locusts that ate every green thing and all the grass and fruit and leaves off the trees, etc. These locusts in Revelation don't eat anything green, no trees, no grass(remember - trees are people).Of course not! They eat men's brains!  Uneducated men, unlearned in the Word of God, unsealed brains (which are what is supposed to be in their foreheads)! And they consume any truth found growing and leave behind their poop!

Now, back to Revelation chapter 9

Rev. 9:4 And it was commanded them that they should not hurt the grass of the earth, neither any green thing, neither any tree; but only those men which have not the seal of God in their foreheads.

Do you have the seal of God in your forehead? Then when the devastation comes and is coming, you'll be completely untouched, unharmed, uneaten alive!

Here's a "Picture", a physical enactment, the type set forth, so that we can "see" the spiritual. The Lord God visited Ezekiel.  Did you know that?  It's right in chapter one of his book.

And before He departed He gave these instructions to Ezekiel:

Ezekiel 9:3
And the glory of the God of Israel was gone up from the cherub, whereupon He was, to the threshold of the house. And He called to the man clothed with linen, which had the writer's inkhorn by his side;

Who cries out against and sighs for all the abominations going on, even against the abominator that makes desolate?God's elect, of course!

[5] And to the others he said in mine hearing, Go ye after him through the city, and smite: let not your eye spare, neither have ye pity:

[6] Slay utterly old and young, both maids, and little children, and women: but come not near any man upon whom is the mark; and begin at my sanctuary. Then they began at the ancient men which were before the house.

Oh, and by the way. Did you notice that the judgment begins at the house of the Lord, His sanctuary/church (1 Peter 4:17).

In our next study we will learn the length of time these locusts will have to swarm the earth. Christ said He would shortened the time of the reign of the spurious messiah, Satan, who is pretending to be Christ, else no flesh would be saved alive. Given enough time, the dragon and his locusts would consume everyone.

Don't worry, they won't!
Christ will see to it!