End days reference to Judah and Israel as two separate entities; neither of which we know as Jews today.

Scripture:  Jeremiah 3:18 In those days the house of Judah shall walk with the house of Israel, and they shall come together out of the land of the north to the land that I have given for an inheritance unto your fathers.

Jeremiah 23:6  In his days Judah shall be saved, and Israel shall dwell safely: and this is his name whereby he shall be called, THE LORD OUR RIGHTEOUSNESS.

Jeremiah 30:3  For, lo, the days come, saith the LORD, that I will bring again the captivity of my people Israel and Judah, saith the LORD: and I will cause them to return to the land that I gave to their fathers, and they shall possess it.

Jeremiah 50:4  In those days, and in that time, saith the LORD, the children of Israel shall come, they and the children of Judah together, going and weeping: they shall go, and seek the LORD their God.

Jeremiah 50:20  In those days, and in that time, saith the LORD, the iniquity of Israel shall be sought for, and there shall be none; and the sins of Judah, and they shall not be found: for I will pardon them whom I reserve.

Yep! They are two separate houses, but scattered, to this day and will be until God joins them together when He returns. See Ezehiel 37:15-22

Have you ever given any thought to how it is
that Christians sing in their hymnals about and say prayers unto "the God of our fathers,
Abraham, Isaac, and Jacob"
and then turn right around and refer to them as Jews!

None of those three were Jews,
for Judah was a son of Jacob (see chart below).

Do you know that the words Hebrew, Israelite, and Judah (Jew)
are NOT synonymous terms.

God's appointed watchmen,
those who have eaten the Scroll, the Word of God,
and digested it in their bellies, do know the difference.

In fact, they are instructed to educate their people
about those differences and so it is a very important "end times"
job of the watchmen.

Let's read about it.

Ezekiel 37:15 The word of the LORD came again unto me, saying,

The Hebrew word for "Moreover" is "owd", #5750 in Strong's Concordance
and it means "iteration" or "continuance", also again, repeatedly, "all life long".

There is something so extremely important that our Father wants
His watchman to continually teach it, all their lives!

They are split into two houses!

There are two houses, two sticks, NOT ONE!

Here is why this is so important:

If you do not understand these two houses, then you are not a watchman unto the house of Israel, for you know not who to watch over. Furthermore, if you do not understand who these two houses are, then you cannot possibly understand Bible prophecy!  Here's the test question, "Can you show someone where the United States of America, which has many times more Bibles in the land than people, is mentioned in God's Word?" You should not only be able to do that, but as a watchman you are commanded to show the two sticks to the dry bones! That's what this section of the 37th chapter of Ezekiel is all about!

You see, watchmen know that if you go out among the dry bones
and speak with them and ask them where the house of Israel is today,
they will all point their phalanges to the Middle East
and say "over there"!

And the biggest problem is that most ministers and preachers
will tell you exactly the same thing,
that the Jews are the same as the house of Israel,
but they are "dead" wrong.

So much for their understanding of Bible prophecy, huh!

So here's what you do:
You say to one of these bone heads when you encounter them,
"Don't move, I'll be right back."

Then go over to the nearest tree and rip off two small limbs... wait a minute!

Check and make sure this action is not in violation
of one the 57,002 environmental regulations in your township.

Next, take a permanent black Sharpie and write "Judah" on one of the sticks like Ezekiel 37:16 told you to do,
hand it to skeleton man*, and say,
"Hold this up in your left hand a minute."

Take the other stick and write "Joseph" on it like Ezekiel 37:16 told you to do
and tell your sinew challenged friend to hold this up in his right hand.

Now say to him/her,
"Are you holding one stick or two sticks?"

If he says, "Wow man, I don't know",
that means you are in a really arid section of town
where the bones are becoming petrified,
i.e. getting stoned.

Just say "Ok dude" and go repeat this process
perhaps in the suburbs somewhere.
(This is a fairly close analogy to the teaching job of a watchman.)

Anyway, you've got the picture in your mind concerning the TWO sticks, not one stick, right?

*Note: Gender cannot be readily determined by looking at a skeleton. Gender is a thing of the flesh. So doesn't that make you wonder why all the prehistoric skeletons they discover are always called "men", you know, Neanderthal Man, Pilton Man, etc. Maybe those who made the discoveries were totally wrong and it was really Neanderthal Woman they found! Women just aren't treated equally with men in the theory of evolution.

For the less theatrical among us,
there is another way to use "sticks"
to demonstrate that which God wants His watchmen
to continually educate the dry bones about,
and that is simply to write on and hold up the two branches on the Family Tree,
one for Judah and one for Joseph. 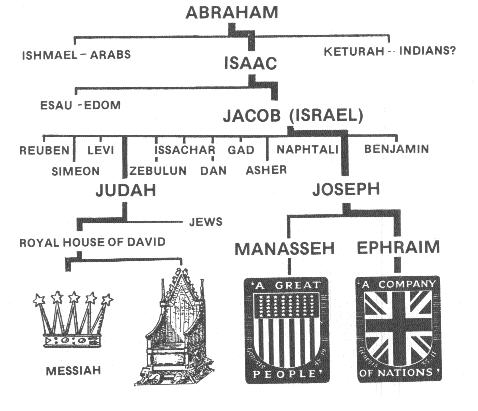 Let's continue with verse 17 where God now tells Ezekiel
that once the two sticks have been shown to be two separate sticks,
demonstrate that they will be joined together and become just one stick.

This is prophecy and will happen at the restoration in the Millennium,
which begins at the 7th Trump, the return of Jesus Christ.

Ezekiel 37:17 And join them one to another into one stick; and they shall become one in thine hand.

Then after you join the two sticks back together
so that they are now one in your hand,
just smile and wait for the fish to bite,
or the bones to shake and rattle and start coming together.

This question by a "child" of your people
would be your cue to teach from God's Word
in the manner in which watchmen always teach,
i.e. "Thus saith the Lord GOD".

You simply say something like,
"Did you know it is written
(you could even say "in Ezekiel chapter 37" if you remember the chapter)
that God is going to restore the house of Judah and the house of Israel into one?

That is because they are two separate houses right now."

They shall be one in HIS HAND, the Lord's hand!

It is the Lord GOD, not man,
who will restore His people, both houses you now know,
so that they and all the nations round about them
"Shall know that He is the LORD".

Ezekiel 37:20 And the sticks whereon thou writest shall be in thine hand before their eyes.

You keep showing them
and keep telling them dry bones about those two separate houses,
watchman!

You stick to it!

Please log unto and read Pamphlet #1278 for further information.


If you would like to have your essay published
as part of the American Wisdom Series
submit your manuscript to Rhine Publishing Co
at the address above for consideration.